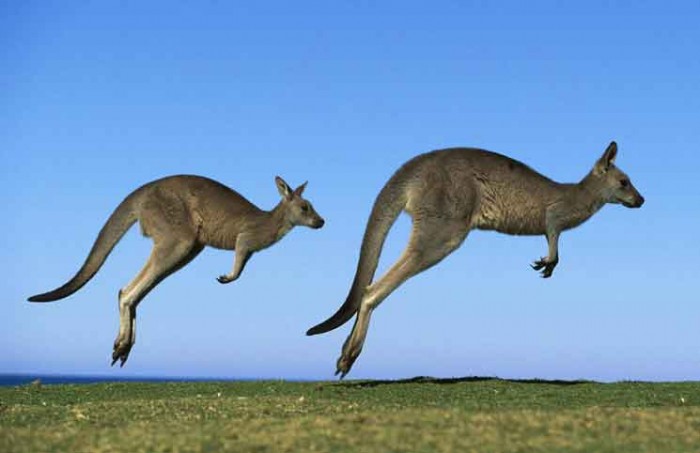 This is supposedly a true story from a recent Defence Science Lectures Series, as related by the head of the Australian DSTO’s Land Operations/Simulation division.

They’d been working on some really nifty virtual reality simulators, the case in point being to incorporate Armed Reconnaissance Helicopters into exercises (from the data fusion point of view). Most of the people they employ on this sort of thing are ex- (or future) computer game programmers. Anyway, as part of the reality parameters, they include things like trees and animals. For the Australian simulation they included kangaroos. In particular, they had to model kangaroo movements and reactions to helicopters (since hordes of disturbed kangaroos might well give away a helicopter’s position).

Being good programmers, they just stole some code (which was originally used to model infantry detachment reactions under the same stimuli), and changed the mapped icons, the speed parameters, etc. The first time they demonstrated this to some visiting Americans, the hotshot pilots decided to get “down and dirty” with the virtual kangaroos. So, they buzzed them, and watched them scatter. The visiting Americans nodded appreciatively… then gaped as the kangaroos ducked around a hill, and launched about two dozen Stinger missiles at the hapless helicopter. The programmers looked rather embarrassed at forgetting to remove *that* part of the infantry coding… and the Americans left muttering comments about not wanting to mess with the Aussie wildlife….

As an addendum, simulator pilots from that point onwards avoided kangaroos like the plague, just like they were meant to do in the first place….