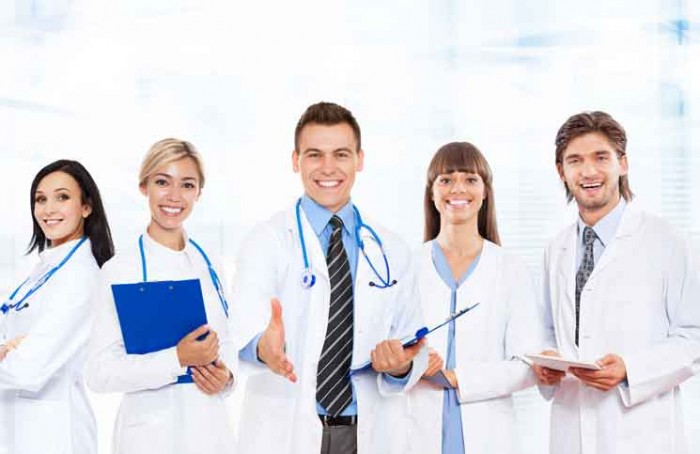 –Dr. Richard Byrnes, Seattle, WA
One day I had to be the bearer of bad news when I told a wife that her husband had died of a massive myocardial infarct. Not more than five minutes later, I heard her reporting to the rest of the family that the had died of a “massive internal fart.”

–Dr. Susan Steinberg, Manitoba, Canada
I was performing a complete physical, including the visual acuity test. I placed the patient twenty feet from the chart and began, “Cover your right eye with your hand.” He read the 20/20 line perfectly. Now your left.” Again, a flawless read.Now both,” I requested . There was silence. He couldn’t even read the large E on the top line. I turned and discovered that he had done exactly what I had asked; he was standing there with both his eyes covered I was laughing too hard to finish the exam.

–Dr. Matthew The odropolous, Worcester, MA
During a patient’s two week follow-up appointment with his cardiologist, he informed me, his doctor, that he was having trouble with one of his medications. Which one?” I asked. The patch. The nurse told me to put on a new one every six hours and now I’m running out of places to put it!” I had him quickly undress and discovered what I hoped I wouldn’t see. Yes, the man had over fifty patches on his body!Now the instructions include removal of the old patch before applying a new one.

–Dr. Rebecca St. Clair, Norfolk, VA
While acquainting myself with a new elderly patient,I asked, “How long have you been bed-ridden?” After a look of complete confusion she answered Why, not for about twenty years — when my husband was alive.”

–Dr. Steven Swanson, Corvallis, OR
I was caring for a woman from Kentucky and asked, So,how’s your breakfast this morning?” It’s very good, except for theKentucky Jelly I can’t seem to get used to the taste,” the patient replied. I then asked to see the jelly and the woman produced a foil packet labeled”KY Jelly.”

–Dr. Leonard Kransdorf, Detroit, MI
And Finally . . . A new, young MD doing his residency in OB was quite embarrassed performing female pelvic exams. To cover his embarrassment he had unconsciously formed a habit of whistling softly. The middle aged lady upon whom he was performing this exam suddenly burst out laughing and further embarrassed him. He looked up from his work and sheepishly said, “I’m sorry. Was I tickling you?”She replied, “No doctor, but the song you were whistling was ‘I wishI was an Oscar Meyer Wiener.”